Dr. John Eric Goff admits that his knowledge of physics doesn’t make him the next Bruce Lee. But it does make him a master of the physical forces at work in martial arts.

The University of Lynchburg professor’s new book, “The Physics of Krav Maga,” grapples with how the fighting system takes advantage of center of gravity, leverage, reaction times, and other principles he teaches in the classroom.

“Knowledge is, certainly, power,” Goff, who holds a black belt in karate and a purple belt in Krav Maga, said. “Knowing the physics behind Krav Maga could lead to a positive direction of adaptation and understanding.”

According to a description by his publisher, the book “explains the science behind dozens of Krav Maga moves, from headlocks to hammer fists. … With step-by-step descriptions and detailed photos of each critical motion, Goff takes a scientific look at everything from punch speed to power output and reaction time. Armed with this book, readers will understand the physics behind each move.”

Developed in Israel for street fighting, Krav Maga combines many fighting styles — always evolving and allowing less effective techniques to fall to the wayside. “It’s about going in, attacking quick, and getting out of harm’s way quickly,” Goff said. “We practice hostage situations. We do active shooter drills. We are taught to fight back. Krav Maga targets the areas where, if we’re hit, we will feel pain.”

While a Krav Maga master may be intimidating, the physics in Goff’s book are not. He wrote the book with a broad audience in mind. “There’s not a single equation in the book,” Goff said. “All of the physics in this book is defined conceptually, rather than with an equation.

“It all comes from these big ideas in physics: Your balance, center of mass, your feet orientation. There has to be a good stance, a good posture, so you can defend yourself from many disorienting objects. It’s all explained by physics.”

Goff has taught physics at the University of Lynchburg since 2002. He’s known worldwide as an expert on the physics of sports, and he’s helped his students take part in research on the Tour de France, World Cup soccer balls, and more. “The Physics of Krav Maga” is the first book marrying his martial arts practice with his expertise in physics.

“The Physics of Krav Maga” is available on Amazon or directly from the publisher, Johns Hopkins University Press. 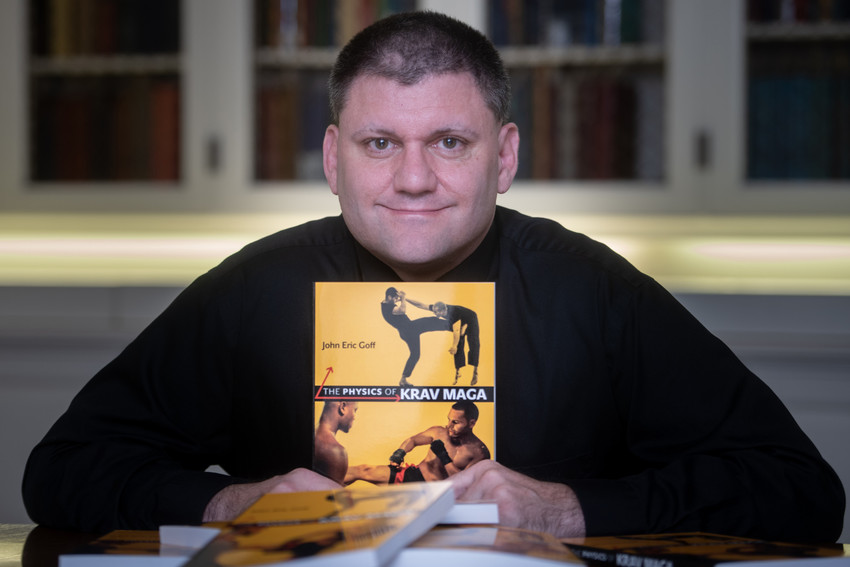