Dr. Brian Crim, a history professor at the University of Lynchburg, will talk about “Unrepentant Nazis” at 7:30 p.m. Thursday, November 14. The lecture, “From ‘Unrepentant Nazis’ to ‘Our Germans: Project Paperclip and the National Security State’,” will be held in Hall Campus Center’s Memorial Ballroom. It is free and open to the public.

Crim’s talk deals with the former Nazi German scientists who were brought to the U.S. after World War II. There were about 1,500 total, some of whom became integral figures in the U.S. space program.

“It revolves around the switch from how they were first considered Nazi’s and slowly became ‘our Germans,’ citizens, and beloved figures in some cases,” Crim said, referring specifically to renowned rocket scientist Wernher von Braun. 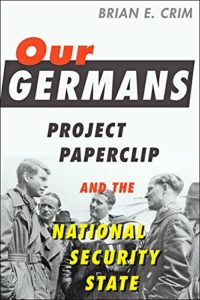 “It’s well timed because of the recent anniversary of the moon landing. This story is a big part of that because so many of these scientists were with NASA. The people we captured in World War II, many of them worked on this pivotal event of getting us on the moon.”

He added that there was also “a human cost to the victory … because some of them committed some horrific war crimes along the way.”

Crim has written two books on the subject, “Our Germans: Project Paperclip and the National Security State” and “Class of ’31: A German Jewish Émigré’s Journey Across Defeated Germany.” Walter Jessel, whose memoir is the basis of “Class of ‘31” coined the term “unrepentant Nazis,” Crim said.

Both books were published in 2017 and “Our Germans” will be released in paperback in January 2020.

Crim’s talk is part of the University Lecture Series, a diverse array of lectures by scholars and experts at Lynchburg. Speakers offer compelling stories about their research, their expertise, and their advice to members of the campus and Lynchburg communities.

“It’s history, but it’s also meant for people in the sciences,” Crim said of his upcoming talk. “It bridges humanities and the sciences. It’s one of the reasons why I wanted to do this talk. We are often silo-ed here — sciences, humanities, etc. I’m a historian, but I’m writing about scientists and how the science community evolved after World War II.”