/ In the News / Students find endangered mussel in Pedlar River

The James spinymussel is hard to find for a few reasons.

For one, it’s endangered.

Also, its small, yellowish-brown shell looks very much like a rock, according to Wrenn Cleary ’20.

Last week, Cleary and other University of Lynchburg environmental science classmates waded into the Pedlar River, about 18 miles from campus, to look for the elusive mussel. 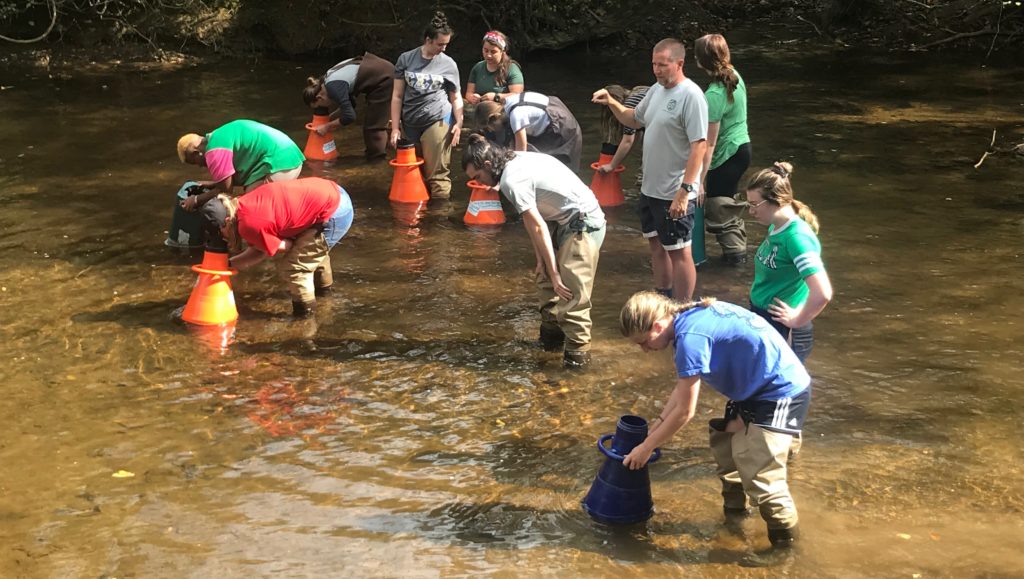 They plunged buckets with plexiglass windows into the water to give them a clearer view of the river bottom. “I found my first mussel by simply moving a leaf and noticing one sticking up partly out of the sediment,” Cleary said.

The James spinymussel population has dropped like a rock in the past 20 years because of erosion and other issues affecting its habitat in the James River basin. Cleary said it’s good for her and her classmates to see the impact firsthand.

“Stepping out of a classroom and into the natural world is one of the best ways to learn about our environment and the complex role of ecology,” she said.

Cleary, a Westover Honors student and a finalist for the Sommerville Scholar award, has stepped out of the classroom quite a lot in her years at Lynchburg. After her sophomore year, she had an internship studying water quality in Costa Rica.

While there, she decided she wanted to become fluent in Spanish. She went on a study abroad trip to Spain and then stayed in the country an extra three months to master the language.

She also has had campus jobs in the Bike Shack, where she repairs bikes and encourages eco-friendly transportation, and the Outdoor Leadership Program, where she leads hikes and other outdoor activities throughout the state.

It all adds up to lots of ways to help the environment and connect people to nature.

“As humans continue to build developments and expand our reach into natural environments, we can have unintended consequences on the organisms dwelling in those places,” Cleary said. “Conservation allows us to acknowledge how our actions have affected these organisms and how we can work to restore them into their natural ecological role.”

Dr. David Perault, the professor for Cleary’s conservation ecology class, has been bringing students to the Pedlar River for 10 years to work alongside Bryan Watson, an aquatic resource biologist who works for the state.

“It’s good for the students to be involved in actual conservation work — not just hear about it in the classroom,” Perault said.

It’s also a good way for them to kickstart their careers, he said, noting that Watson has hired several recent Lynchburg graduates.

On most previous visits to the Pedlar River, even non-endangered mussels have proven elusive. But in this month’s visit, students found individuals from three different species of mussels, including the endangered James spinymussel. That’s a good sign, Perault said. “It’s great to actually see an ecosystem that seems to be improving!”

Cleary agreed. “Conserving our environment allows for my generation and future generations to appreciate the beauty of the natural world and the influence we can have in preserving this world,” she said.

The conservation ecology class’s outing in the Pedlar River also was covered in the News & Advance’s “For Love of Nature” column today. Read that story here.