/ In the News / Professor and graduate get national audience on U.S. women’s soccer issues

The Washington Post, BuzzFeed, and other news outlets are asking Dr. Lindsay Parks Pieper, a sport management professor at the University of Lynchburg, to speak up as the U.S. Women’s National Soccer Team competes in the Women’s World Cup.

On Tuesday, the Washington Post published an op-ed by Dr. Pieper and Tate Royer ’19 about how the national women’s team has had to fight for equality — in pay, expectations, equipment, and more. 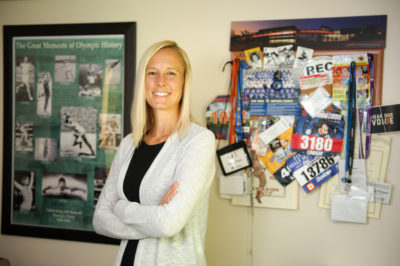 “The World Cup isn’t the only battle the team is fighting,” the article says. “Just three months ago, 28 of its members filed a gender discrimination lawsuit against the U.S. Soccer Federation [arguing] that the USSF discriminates against women by paying them less than members of the men’s team despite the women’s team’s far greater success in international competitions.”

Going through the team’s history, Dr. Pieper and Royer explained how the women’s team has paired “on-field victories with off-field activism” to seek equal treatment.

Wednesday morning, Dr. Pieper was a guest on the BuzzFeed News live show AM to DM. She spoke with the hosts for about five minutes, covering topics including pay inequality and the criticism of the athletes’ celebrations. As the team trounced Thailand in their first game of the Women’s World Cup, some spectators on social media criticized the 13-point victory and the on-field celebrations.

“I was so excited and so happy for these women who have trained and worked so hard for so many years,” Pieper said. “This is the elite of the elite competition, and these women have the right to go out there and do their best and score goals and celebrate.”

Watch the show here, with Dr. Pieper’s comments beginning at about the three-minute mark.

#AM2DM is LIVE! We're discussing the US women's soccer team, plus sitting down with cast members from @MaiselTV and #YoungerTV https://t.co/dYoIIW8VoY

Dr. Pieper also has forthcoming interviews with ESPN Radio and other outlets.

Royer, a Westover Honors graduate and four-year member of the Lynchburg women’s soccer team, wrote her Westover Honors senior thesis about the history of the U.S. Women’s National Team. The website Sport in American History published an adapted version of her thesis on Tuesday.