What will the Tour de France look like without Chris Froome?

Two University of Lynchburg students and physics professor Dr. John Eric Goff are preparing predictions for the annual bike race. Although their model predicts winning times rather than name winners, it’s clear that the race will be different with the British cyclist sitting it out due to injuries from a training crash.

Without Froome, mountain stages could be a couple of minutes slower, Dr. Goff said. “Cyclists like Froome, at the smallest weight, are the ones who dominate in the mountains,” he said. “It’s a unique coupling of having low mass but also being able to output large amounts of power.”

He said Froome’s documented power output shows he can push down on the pedals with a kilowatt of power, similar to a microwave oven’s energy output. That propels him up a mountain faster while larger cyclists expend a greater percentage of their power just fighting gravity.

Dr. Goff and his students have been physically modeling the Tour de France for about 15 years. Using calculations informed by the laws of physics and the terrain of the race, they predict how long it will take for the winner of each stage to cross the finish line. They routinely predict the time within 5% of the actual result.

This year, Carl Pilat ’21 and Noah Baumgartner ’22 are working alongside the physics professor. 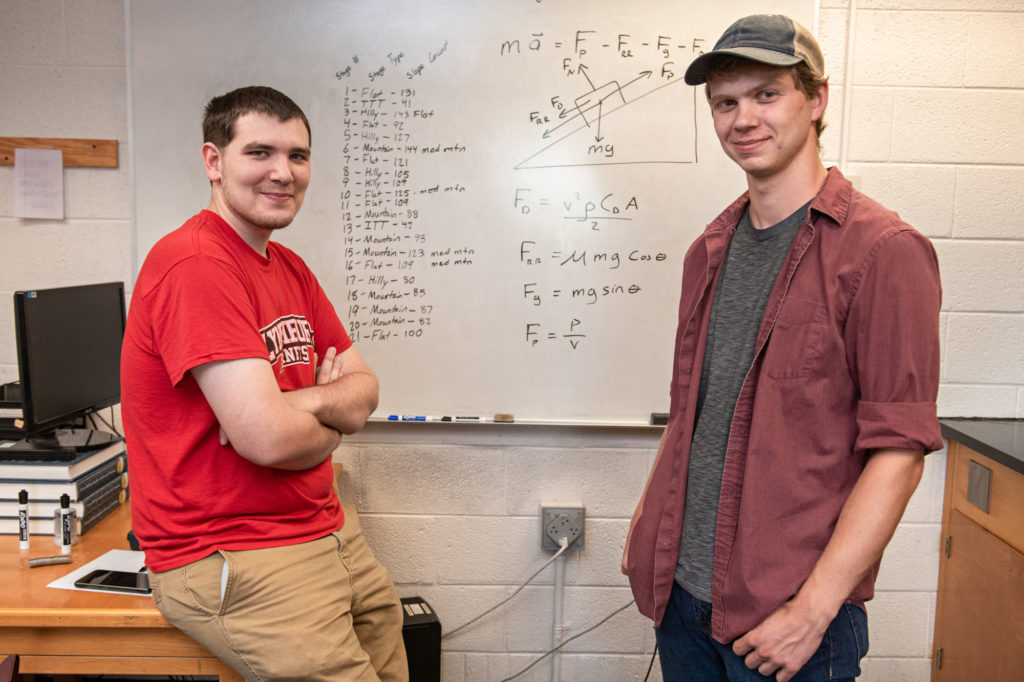 Both wrote new computer programs to complete the calculations. Pilat used Wolfram Mathematica while Baumgartner programmed in Python. They used their programs with the data from the 2018 Tour de France to verify the predictions.

Baumgartner gathered data on the elevation changes in the 2019 Tour de France route. Each stage is broken into segments based on the number of changes in slope experienced across the stage. Each segment essentially becomes an inclined plane problem.

They used Newton’s second law — force equals mass times acceleration — with variables such as riders’ force output, rolling resistance, and gravity to determine how long it will take a lead cyclist to complete each segment.

“We essentially solve this problem over and over again,” Pilat explained, pointing to an illustration of an inclined plane problem on a dry-erase board. “We put in their initial speed, their power to drive them forward, rolling resistance, drag. … That will figure out what their average acceleration is to get to the final slope.”

Pilat got involved in the project last year. It was also the first year he watched any of the Tour de France. “It was really exciting,” he said. “I felt intimidated going into it because I didn’t know how it was going to stack up.”

In the end, most of the predictions came within 5% of the actual time.

Baumgartner, a Westover Honors student, said Dr. Goff asked him this spring if he’d be interested in doing summer research. He asked to join the Tour de France project because he has some interest in cycling and liked the idea of getting to work on a real-world physics problem.

“I’ve been able to work through things that I wouldn’t have worked through normally in a classroom, and work with a professor and see how he would go through the process,” Baumgartner said.

The research team has a little more research to do before the Tour de France begins on July 6. They are looking at what new technologies might impact resistance and power output. Then, they will await the results from each stage.

“I’m really interested in seeing how accurate we get our predictions,” Baumgartner said.