Lynchburg-area history comes to life in a new series of interactive maps produced by University of Lynchburg students and Historic Sandusky staff.

The map project was launched Monday, the 155th anniversary of the Battle of Lynchburg in the Civil War. A map of that battle is a cornerstone of the project. 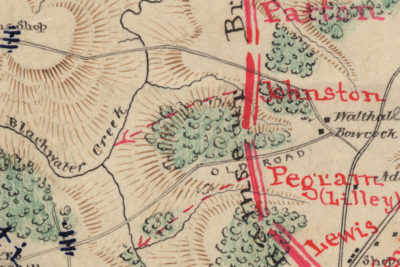 On June 17, 1864, Union soldiers seized the home known as Sandusky for temporary headquarters. The fighting lasted for two days, with some skirmishes on what is now the University of Lynchburg campus.

For example, there is the 1864 Battle of Lynchburg map, showing where troops moved and confronted each other. Wilson laid the map over a modern map with satellite imagery, aligned street intersections and other features to create a good fit, and made it interactive. This leads to a story map allowing users to compare modern features with the Civil War-era map. Eventually, users will be able to watch animations showing movement of troops and the battlefront. Other maps in the works provide historic details about the battle of Lynchburg and other aspects of the region’s history.

“This started as a Civil War-themed project, but there’s so much besides the two-day battle,” Greg Starbuck, executive director of Historic Sandusky, said. “We’ll broaden it to all of the 19th century, as much as we can fit in it.”

Wilson, who is completing his master’s degree in science education at the University of Lynchburg, was an environmental science major at Lynchburg before. That’s where he discovered his interest in geographic information systems, and during his senior year he completed an internship in the City of Lynchburg GIS department. Putting those skills to work at Sandusky has been interesting not just because of the challenge, but also the educational value of the end product. “GIS allows us to digitize the old maps, pull the features off of them, and use those against modern maps and do all sorts of analysis, and that lets us kind of learn new things,” he said.