Dylan Schumacher ’20 wants to be the U.S. Army’s “Best Warrior.” 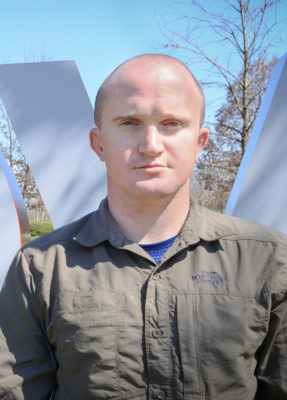 In March, the business administration major and sergeant in the U.S. Army Reserve was named “Noncommissioned Officer of the Year” at a brigade-level competition held at Fort Knox, Kentucky.

The multi-day event, part of the Army’s annual Best Warrior Competition, involved numerous physical and mental challenges. Among other things, Schumacher completed a written test, battle drills, day and nighttime navigation exercises, an obstacle course, and a 12-mile road march made while carrying 40 pounds of weight.

Schumacher said his will was tested during the road march. “During the 12-mile ruck, we traversed three hills called Misery, Agony, and Heartbreak,” he said. “The hills tested me. I thought about quitting a couple of times.”

If he wins in New Jersey, Schumacher will compete at Fort Bragg, North Carolina, in June. A win at Fort Bragg qualifies him for the Department of the Army competition in October and a shot at the Army’s “NCO of the Year” or “Best Warrior.”

“A competition for any subject matter is a great way to test your respective skill set,” Schumacher said. “Winning proves a person has adequately prepared, while losing displays what … needs improvement.

“I’m happy to be physically and mentally capable to compete so, win or lose, I’ll be happy and will continue to look for the methods to improve my readiness. But, it pays to be a winner, so to be able to be called ‘NCO of the Year’ for an entire training command would be elating.”

Schumacher, a Lynchburg, Virginia, native, transferred to the University of Lynchburg in 2018 after earning an associate degree in business administration. His military job is satellite communications system operator and maintainer, but he also trains cadets at Fort Knox. Before coming to Lynchburg, he also served the Army on active-duty status for four years.