Some of these “small miracles” were the ways Kohlhaas and the other DPT students were able to give patients hope, listen to their stories, and see improvement in their function after what was a relatively brief encounter. “Also, the fact that none of us got sick or hurt during our travels,” he said. “Everything went mostly according to plan, and we had the wisdom to know when a patient was appropriate for therapy and when they were not.

“Other miracles included the cessation of a little kid crying when we sang to him and all the donations of vitamins, Band-Aids, cold medicine, and other medical necessities. Nobody walked on water or cured blindness, but these small miracles added up significantly.”

Dr. Gary Austin, professor of physical therapy at Lynchburg, has been taking students to Guatemala, twice a year — spring and fall breaks — since 2016. The visits are coordinated through a church in Antigua, Iglesia del Camino, which translates from Spanish as “Church of the Way” or “Church of the Road.”

While in Guatemala, the group, which also included PT faculty member Jason Grandeo and Dr. Austin’s teenage daughter Julia, held clinics in and around Antigua. Sometimes, treatment was as simple as assuring someone they’d be alright.

One patient, a diabetic man who’d had a leg amputated due to an infection, was told a year ago that he had about a month to live. He came to the clinic “for hope and to talk and to have someone listen to him,” DPT student Lindsey Furman said. “He was very strong, but didn’t have a lot of support outside of the church and us. So that was kind of eye opening.”

After just a few minutes, Furman said, the man was “laughing and joking with us.” She added that the team raised money to buy him a new pair of crutches.

Back pain and backstories

One of the major physical problems the group encountered in the clinics, in people as young as 12 or 13, was back pain. Morgan Horne worked with one girl who spent her nights on an assembly line, processing snap peas.

“She was standing for 12-plus-hour shifts, through the middle of the night,” Horne said. “She also [had] a lot of stuff going on outside of her work life — family and stress. Mainly, it was [about] positioning and functional movement. I had her bend over and touch her toes a lot, and every time she did that it got better.” 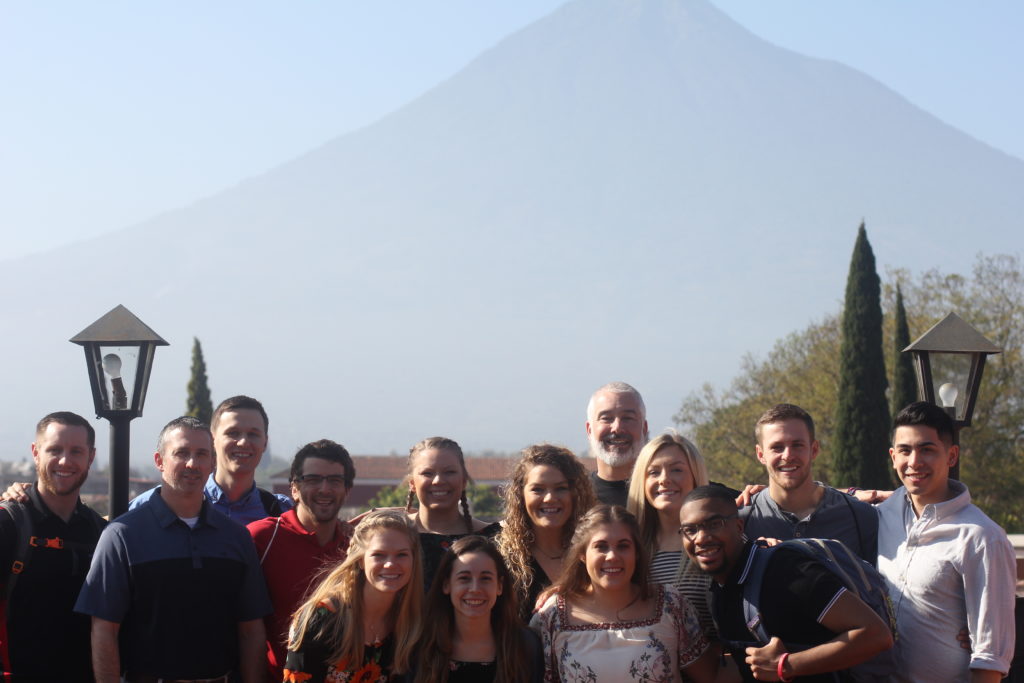 One woman that DeYoung Don saw had what he described as an “intense backstory,” well beyond the neck and back pain she experienced due to carrying heavy sacks at a coffee plant. A few years ago, Don said, the woman and two of her children were caught up in a mudslide. One child, a daughter, died.

Despite having a leg injury, the mother refused to go to the hospital for six days until her daughter’s body was found. “The mother was paralyzed from the waist down for two years,” Don said. “We were just hearing all this slowly. We wanted to make her buy in, get her to trust us. We wanted her to leave with something that was beneficial.”

Adi Feickert had a similar experience. “They just want to be heard,” she said. “One of our patients, we literally did deep breathing with. She wasn’t able to look us in the eye and was speaking to the translator. She got into her story, filled with abuse.

“Toward the end, she was smiling and hugged us. Anyone could teach her how to breathe. It was the fact that we listened that totally changed her perspective. She just walked out so much lighter, too.”

While in Guatemala, the team also worked with a local ministry called Hope Haven that provides wheelchairs to needy people all over the world. Over the fall break, the DPT program provided five wheelchairs for children in Guatemala. This time, they were able to provide 14, thanks to the generosity of students, faculty, staff, and friends of the University.

The community responded in a big way, donating $5,000, not including vitamins, bandages, soccer balls, and other items that poured in. “We got a massive amount of stuff,” Dr. Austin said. “It filled six suitcases.”

It was at Hope Haven, too, that another small miracle occurred — albeit a miracle of balance and spatial relations. One day, the team fitted eight children for wheelchairs, after which all of the children and their families began piling into a single van. “Every patient that came to us came in the same van,” Kohlhaas said, adding that one driver traveled all over Jalapa, about five hours from Hope Haven, picking everyone up. “All of these families are taking their entire day out to help their kid.”

Once the people were inside the van, the wheelchairs had to go on top. Kohlhaas volunteered to help. “I was helping to pack the wheelchairs on top of the van with another man who was working there,” he said. “We got them all stacked up. It took a little dexterity and strength. We knocked one or two down, but finally got it all tied down and just stood there, looking at it. Eight wheelchairs, stacked on top.

“The sun was shining through the trees, kind of like a blessing for their safe journey home. We made a difference in the kids’ lives. That’s the last time I’ll ever see any of those people again, but I know they’ll be a lot better than they were.”

As one might imagine, the patients weren’t the only ones who benefited. At one clinic, DPT student Samson Robinson said he began thinking about happiness and how happy most people he’d met in Guatemala were, despite the poverty and the conditions with which they suffered.

“I was thinking about how privileged we are here, and all of the things we have, and that we’re still not happy,” he said. “We get the next best thing, we’re happy for a second, and then we get another new thing. Seeing the kids, just always joyful. You can’t steal their joy.”

Teammate Brooke Panfil agreed. “Being in that country made me thankful for what I have, but I also was humbled,” she said. “I came in thinking I was going to teach them and all the patients and kids that I saw, but in turn, I feel like I gained more from them than they did from me.

“Just through the amount of love and joy that they had, regardless of what they didn’t have. It really impressed me, coming back to the U.S. I feel more relaxed and less stressed about school and my financial debt, and just the things that I don’t have. I’m thankful for all the things that I do.”

One day in Guatemala, Horne said, the team “got really emotional.” They had just finished praying for some of the children, when the kids told the team to stand up. They thought the kids wanted to go outside and play soccer. Instead, the children wanted to pray for them.

“These kids, who have nothing, are praying over us when we want to serve them,” Horne said. “They all gave us hugs and we cried.”

Dr. Austin, who is known for tearing up when he talks about his team’s work in Guatemala, described the whole experience this way: “We say it’s the definition of indescribable.”