University of Lynchburg assistant professor of Spanish and author Dr. Pedro Larrea will read from his work at the first Thornton Reading event of 2019. The reading will begin at 7:30 p.m. on Wednesday, February 27, in the Sydnor Performance Hall in Schewel Hall. This event is free and open to the public. 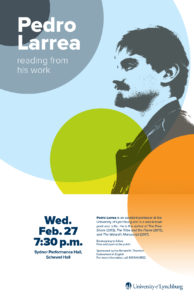 Dr. Larrea earned his MA and PhD in Spanish from the University of Virginia after earning degrees in literary theory and comparative literature from the Complutense University of Madrid in Spain. He is a poet, an essayist, and a translator.

Lynchburg English professor Dr. Laura Long proposed that Dr. Larrea read his work at a Thornton Reading. “I nominated Dr. Larrea because he is an accomplished poet whose poems are engaging, intellectually playful, and surprising,” she said. “We in the English department felt enthused about celebrating a creative writer who is new to our community.”

Dr. Long’s proposal was met with immediate and enthusiastic approval. “Dr. Larrea is our colleague and it’s good to let students and faculty here see how good one of our own can be,” Dr. Richard Burke, English professor and director of curriculum development, said. “He’s very accomplished as a poet and has done a number of high-profile readings.”

Dr. Larrea has published three books of poems: The Free Shore (2013), The Tribe and the Flame (2015), and The Wizard’s Manuscript (2017). His poetry also has been featured in the Spanish journal, Revista de Occidente.

Dr. Larrea has read his poetry at the Library of Congress in Washington, D.C.; the New York Public Library; New York University; and the International Poetry Festival of Granada, Spain. As an essayist, he authored the scholarly study Federico García Lorca en Buenos Aires (2015), and as a translator, he published the Spanish edition of Kevin Young’s Book of Hours.

Dr. Larrea will be reading from his most recent poetry collection, The Wizard’s Manuscript. This book of poems follows a nameless narrator. Hungry and hoping for spells to conjure bread, he finds himself instead enchanted by the fragmentary story.

This collection of poems invites the reader to share the narrator’s experience of self discovery. Dr. Larrea also will read a few short poems from the American edition of his first book, The Free Shore, which will be published this year.