Performances begin at 7:30 p.m. on Thursday, Friday, and Saturday, February 28 through March 2, and at 2 p.m. on Sunday, March 3. Tickets, available via online vendor Etix, are $5 for students, $10 for seniors (60-plus), and $15 for adults. Due to mature content and gunshots — albeit blanks — the show isn’t recommended for children younger than 12. 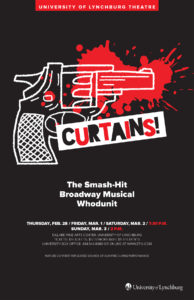 “Curtains” is a play within a play. Set in 1959, it’s opening night of a new musical at Boston’s Colonial Theatre when the show’s lead actress, an aging diva with no discernible talent, is murdered. Everyone, cast and crew, is a suspect, and the detective sent to investigate the crime just happens to be an aspiring musical thespian.

It’s the first time anyone at Lynchburg has worked on this musical and likely the first time it’s been staged in Central Virginia. “It’s a new venture for all of us,” theatre professor and director Jeff Wittman said of the play, which won eight Tony awards during its Broadway run.

“It’s a fairly recent musical that had a good run in New York on Broadway. To my knowledge, we are doing the first production of this musical in the Central Virginia region. Also, because we have been presenting a good deal of serious work in the department recently, we wanted to do something that would teach our students how to handle and perform comedy.”

A Cast of (Crazy) Characters

There’s no shortage of comedy in “Curtains,” which is chockablock with wacky characters. In addition to the murder victim, who is described as a “diva who has no right to be one,” there’s the acrimonious mother-daughter duo of Carmen and Bambi.

Brooke Bosiger ’19 plays Carmen. “She’s a very dominant and brassy character and the producer of the show within the show,” Bosiger, an English and theatre major, said. “She always speaks her mind and does everything in her power to make the show as great as it can be.

“I think I’m really going to enjoy this character because she’s basically me but 20 years older. I love her passion, as well as her directness, which was very taboo during this time period. She’s breaking social norms and taking things into her own hands because her husband is plain terrible, but she doesn’t let that stop her. I’m very proud to be playing her and can’t wait.”

Ellee Evans ’19 plays Carmen’s daughter, who changed her name from Elaine to Bambi because in the Disney movie Bambi’s mother is killed by hunters. This says a lot about Bambi and the relationship she has with her mother.

“Bambi is a stubborn, self-absorbed, tortured artist, in my opinion,” Evans, a theatre major, said. “She has crazy family issues and is constantly trying to prove herself to the world. She will stop at nothing to be the star and make her mother proud of her. However, she has an edge to her that makes her come across as annoying and mean. She’s so strong and is a fighter.”

Evans said playing Bambi is “so much fun,” because Bambi is “not at all like me, in any way. It’s fun to play her and just be unapologetically stubborn.”

For Sami Topping ’19, a Spanish and theatre major, playing Joanie the stage manager is a departure from past roles she’s had at Lynchburg, among them the cartoonish Smee in “Peter and the Starcatcher,” a wolf-killing granny in “Into the Woods,” and eccentric, would-be ballerina Essie in “You Can’t Take it with You.”

“Joanie is very professional and keeps her cast in line,” Topping said. “I’ve found that this character is a bit difficult for me because I’m used to playing very farcical, slapstick characters. Joanie is an older woman who is incredibly put together. It’s been a challenge to add age to my mannerisms.

“I do find some similarities between myself and Joanie, however. I’m the president of the theatre honor society as well as the box office manager, so I can relate to her taking her leadership position seriously. While I’m at work or in a meeting, I’m a bit sterner than I normally am. I also try to maintain an aura of professionalism. I have been trying to channel that part of myself into Joanie.”

The cast of “Curtains” also includes actors from the surrounding theatre community, among them Bill Bodine ’78, ’89 MAd. “It’s a good thing, when appropriate, to bring in guest artists to work with our students,” Wittman said. “This happens occasionally with older, more mature roles. Such is the case with Bill, an alum and no stranger to our stage, having performed when he was a student here and now in the present.

“Bill has joined us three times over the last few years and brings not only his theatre experience but a community presence. Bill, in this play, is playing a theatre producer, and has some scenes and a couple of songs. Karl Lindevaldsen and Scott Rankins, also theatre veterans from the community, help fill out our needed older, cameo roles.”

Evans has worked with this trio of veteran actors before and is excited to share the stage with them again. “It’s awesome to get to work with them and grow with them,” she said. “What makes it even more awesome for me personally is that I was in a show with all of them my freshman year. They are super fun and a joy to be around.”

University of Lynchburg students are working on the technical side of the production, too — lighting design, set construction, costuming, etc. For theatre major Alex Gancedo ’19, who plans to pursue a career in lighting design, working on “Curtains” and other Lynchburg shows has been good experience and good for her resume.

“I believe the numerous responsibilities I’ve taken in regards to lighting and the amount of experience from both main stage and studio shows will help with job finding and choosing a grad school,” she said, adding that she and other students on the “tech side” were “very eager for tech week and to really start getting our hands dirty.”

This is the second year that Kailee Weiman ’19 has worked on costumes for Lynchburg’s theatre productions. Weiman, who also plays murder victim Jessica Cranshaw in “Curtains,” said costuming wasn’t something she planned to do initially, but something she’s developed an affinity for.

“This is actually something still relatively new to me,” Weiman, a theatre major, said. “I started last year, working in the costume shop. I did have some basic knowledge of sewing, but have learned so much throughout the last two semesters working under [costume shop supervisor] Samantha Bower.”

Weiman added that since she has ventured into the world of costuming, she would “totally consider looking for jobs that help me keep this skill set. I wouldn’t have initially thought that would be where I am now, but I thoroughly enjoy it.”

Over the final week of winter break, the cast of 22, along with three students from the stage management team, participated in a five-day musical theatre boot camp aimed at jump starting rehearsals and boosting camaraderie. Sometimes, they worked from 9 a.m. to 9 p.m.

“It’s a unique thing, a chance to be together and bond, rehearse very strongly, and learn music and dances and scenes,” Wittman said. “That takes us to the point where we start rehearsing in the evening, five days a week. It’s a lot of commitment and investment into the production. It’s artistically and personally fulfilling, and a lot of fun.”

Topping agreed, describing boot camp as “a hoot” and adding, “We were dancing every day. We would learn a new dance routine, and then we would block some of the show. In the evenings, we would learn the music. It was a full week, but the work we put in will help the show to soar.”