While attending the University of Lynchburg, Emily Anderson ’20 has been juggling her responsibilities as an exercise physiology major and a military medic for the U.S. Army National Guard.

Anderson joined the military during her junior year of high school and went through basic training during the summer of that year. After returning home to finish her senior year, she traveled to San Antonio, Texas, to train to become a medic in the National Guard. 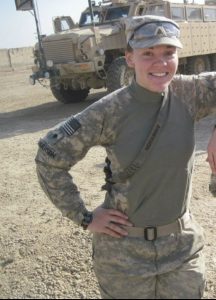 Since then, she has deployed to Iraq, Qatar, and other countries with the National Guard.

Anderson has always had an interest in the medical field. “As a medic, I obtained my EMT certificate and after I returned from Iraq, I went to paramedic school,” she said. “This allowed me to explore the different medical fields. My goal is to apply to physician assistant school because I like the pre-hospital aspect and I want to go into emergency medicine.”

Anderson’s military background has given her frequent hands-on experience with patients. “I got to have many one-on-one interactions with patients, which has set me up for success,” she said.

Anderson was deployed to Iraq in 2011. “Throughout my time there, my job was to drive through towns and transport supplies, like fuel, food, and ammo to American soldiers,” she said. “When I saw the young children there, it gave me a new appreciation for others.”

Anderson’s deployment to Iraq left a lasting impact on her. “I think a lot of Americans take for granted that there has not been a war on this soil for so many years, but for young Iraqi children, that’s all they have grown up with for a majority of their childhood,” she said. “My experiences impacted me to work towards making the world a better place than what it is now.”

She was deployed to Qatar in 2016 and she spent a month on the Caribbean island of Saint Croix last year to assist after they were hit by a hurricane. “When I was gone for a month, my professors were awesome about letting me make up work,” Anderson said. “They scheduled meetings with me and helped me get study material. Overall, they understood that I was overwhelmed with having to make up classwork on my own time.” 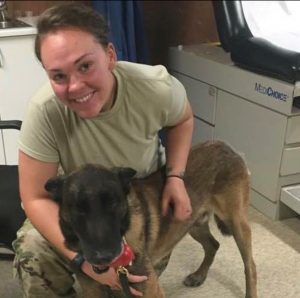 Anderson’s military experience has given her an appreciation for the small aspects of life. “The biggest thing I’ve learned is an appreciation for being able to come to a school where so much is accessible, like technology and online books,” she said. “You definitely learn what you take for granted by seeing other cultures.”

Anderson’s military background has impacted her strongly. “My military experience has helped me with exercise physiology, has given me a lot of travel experience, and allowed me to experience many different cultures,” she said.