After a long day of classes, sports practices, and homework, a group of 10 students comes together to make arguments about ethical issues. Among other topics, the #MeToo movement, social media advertising, and taxes in France provide scenarios for them to discuss and debate.

Ethics Bowl is a debate-style competition that challenges students to defend their positions on ethical issues. It helps students develop skills for public speaking as well as understanding that goes beyond the surface level of the issues at hand. 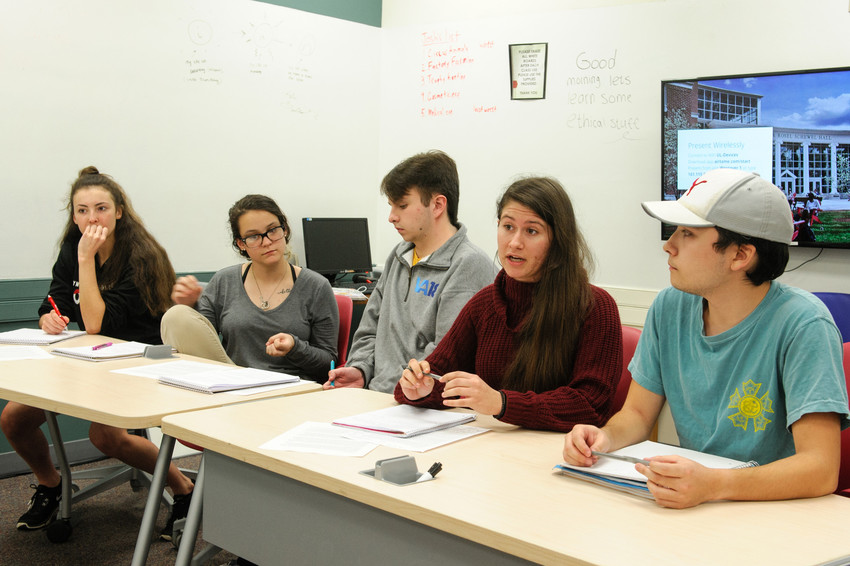 It differs from traditional debate because teams know the the topics before the competition. The national organization provides case studies — the students call them “cool cases” — that describe contemporary issues rife with ethical questions.  The students conduct their own research to back up their points, but they must call upon their knowledge in the moment to answer a variety of questions. 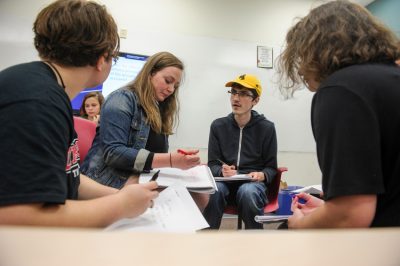 The team is now the largest it has been in recent years, according to Dr. Laura Kicklighter, a Westover Honors College professor who advises the team. “Every year I take on more students than I need, due to students dropping out due to the extra work and other commitments,” she said. “However, this year none of my students have dropped out!”

The team members’ varied backgrounds provide them with strength, Cecilia Roseo ’19 said. “It has been nice to see the team grow,” she said. “We have a very strong team this year with lots of different backgrounds. I think we will do very well at regionals because of all of our different strengths.”

Ethics bowl practice is anything but boring, with team members having a great time while presenting their own ideas on ethical issues. At the beginning, the team split up schoolyard style into two teams to do a mock debate. Dr. Kicklighter picked random case studies for students to practice with. She gave them two minutes to gather their thoughts and then give a 10-minute presentation about their thoughts on the issue. 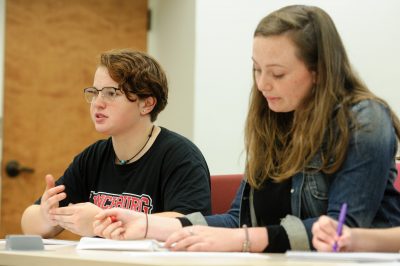 After a team presented its conclusions, the other team challenged the first with comments and questions. Finally, Dr. Kicklighter critiqued their presentations and asked questions to probe their thought process.

This process was repeated four times, each side having two cases to defend and two cases to provide rebuttals for.

The first case asked if the #MeToo movement gave accusers an unfair privilege of being heard over the accused. Next, they discussed whether social media companies such as Facebook should be charged with regulating political advertising and campaign research. Both questions required the students to lean on their prior research to form an opinion and defend it with their knowledge of ethics.

As the tournament draws closer, the team has continued to practice and prepare for the competition. The Mid Atlantic Region includes Lynchburg and 15 other schools, including colleges like Clemson, Wake Forest, and UNC-Chapel Hill. Lynchburg is one of the smallest ethics bowl schools in the region, but won first place in 2016 and second place in 2015.

If the team places in the top four in this competition, Lynchburg will then qualify for a return visit to the national competition in February.