Dr. Thomas Jordan is quick to tell you that he wasn’t a great student early on in his college career. In fact, when he entered his freshman year at Pace University in New York, he was put in a remedial English class with two international students. Apparently, his writing was so bad, he said, that college officials thought English was not his first language.

“There were two other guys in the class and they didn’t speak English,” Dr. Jordan, the new executive director of the University of Lynchburg’s Academic Achievement Center, said. “I was not an awesome student at all. I’m OK with it now, but I would never tell the story growing up. … I went to a private parochial school, so this was very disheartening.” 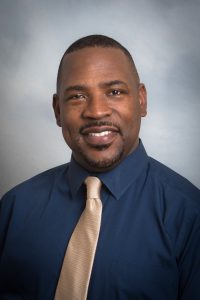 Dr. Jordan told this story recently to a group of new freshmen enrolled in the University’s Summer Transition Program, an initiative aimed at first-generation college students, students from underrepresented groups, and those who might need help acclimating to college life. Students apply for the program if they think it will benefit them.

Dr. Jordan, who went to college intending to be an actor or some other kind of performer, said the remedial English experience taught him a lot and altered his path in life. “From that moment, I thought I could do a whole lot more and started to focus on my academics,” he said.

He got so serious about his studies he eventually earned bachelor’s, master’s, and doctoral degrees. Before coming to Lynchburg this past summer, he was executive director of the Bronx Education Opportunity Center, a program administrated by Bronx Community College, which is part of the State University of New York (SUNY) system. The program provides academic and vocational training for more than 700 adults a year.

As executive director of the Academic Achievement Center, Dr. Jordan said he will be the University of Lynchburg’s “chief retention officer,” with a goal of increasing retention. He also will focus on student success.

“One doesn’t always relate or correlate to the other,” he said, adding that part of increasing retention will be creating a plan to “make students feel like they have a sense of belonging. [The student] experience is going to be the most important part of that retention effort.”

Dr. Jordan hopes to implement a first-year advising system that puts more freshmen in touch with Academic Achievement Center staff. The office could develop a strategic plan for each student and “have them navigate their academic careers in accordance with that strategic plan, because each student is going to be unique and different.”

This approach to advising also would acquaint first-year students with the Academic Achievement Center early on, making them more likely to come to the center for help when they need it. “I think that change will take a little time, but I think it’s to the betterment of the students,” Dr. Jordan said. “The end game is what’s to the betterment of the students. That’s always my end game.”