Dr. Richard Steigmann-Gall, associate professor of history at Kent State University, will present a lecture at 7:30 p.m. on Thursday, September 20, at the University of Lynchburg’s Hall Campus Center ballroom. The lecture, “Star Spangled Fascism: Antisemitism and Political Extremism, Past and Present,” is free and open to the public.

Dr. Steigmann-Gall, a scholar of fascism, Nazism, religion and politics, German history, and the Holocaust, is the author of The Holy Reich: Nazi Conceptions of Christianity, 1919-1945. He is a former director of the Jewish Studies Program at Kent State and has written and lectured extensively on fascism, including the American variety. 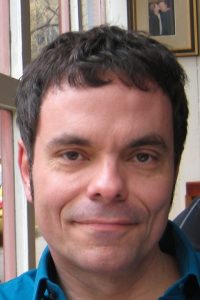 “Fascism is easy to dismiss as a boo word, and because of The History Channel, we only let ourselves admit something is fascist when we see armbands and jackboots,” he said. “But just like racism in this country isn’t about wearing hoods and burning crosses, so too is fascism not just about uniforms and parades.

“It’s about the belief that the majority in a country is ‘losing control’ of the country and that it must do anything it can to reassert that control. It’s about denying the legitimacy of a past president by claiming he ‘isn’t really American’ or ‘wasn’t born here.’

“It’s about the disregard of separation of powers. It’s about people in power pandering to one group of citizens by denying the equal validity of other groups, and we need to push back against this development, even harder than we are now, if we’re going to stop it, let alone reverse it.”

Dr. Brian Crim, John M. Turner Distinguished Chair in the Humanities at Lynchburg, met Dr. Steigmann-Gall at a conference on the Holocaust. He also has heard him speak on the subject that he’ll be addressing at Lynchburg.

“I heard a more academic version of this talk at the German Studies Association in 2017,” Dr. Crim said. “Richard was on a panel with other noted scholars discussing the notion of trans-Atlantic fascism and the history of ‘Fourth Reich’ rhetoric. I know Richard to be a practiced and accomplished public speaker with a talent for reaching a broad audience.”

He added that Dr. Steigmann-Gall’s recent scholarship on American fascism is “incredibly prescient right now” and an important message for students to hear. “We tend to think of fascism as a foreign import, or a defeated ideology from another generation,” Dr. Crim said. “Richard locates fascism within U.S. history as well, and I believe our students should understand how dangerous and fluid this ideology can be.”

Asked about how Americans can stop the spread of fascist ideas in this country, Dr. Steigmann-Gall said, “We can act on several different levels simultaneously. First, by protesting on the streets, which we have done, and which has yielded some results. We need to do more of it though. … We can also act by educating the public to the historical dangers such behavior represents, that the country is taking a very dangerous turn, and that it will affect them, too, if unity of purpose is lost.”

Dr. Steigmann-Gall earned bachelor’s and master’s degrees in history and European history, respectively, from the University of Michigan. He earned his PhD at the University of Toronto. Among other things, he was featured in a 2009 documentary on The History Channel about the religious views of Adolph Hitler.

Dr. Steigmann-Gall’s lecture is sponsored by the John M. Turner Distinguished Chair in the Humanities. Established in 1992, this fund honors the contributions of John M. Turner Jr., Class of 1929, to his alma mater. Dr. Turner also served the institution from 1933 to 1974 as a professor of English, dean of the College, and vice president for academic affairs.