It’s a midsummer afternoon in a biology lab on the third floor of Hobbs-Sigler Hall and Mandy Larsen ‘19 is standing over a Petri dish full of termites. The tiny, off-white creatures are yellow-footed reticulated termites — Reticulitermes flavipes, to be exact — and Larsen has spent much of her summer trying to find out what kinds of chemicals they react to.

For the past year, Larsen has been studying termites with Dr. Jürgen Ziesmann, who teaches anatomy and physiology at Lynchburg. He’s been researching the destructive little insects for three decades. “I started before I had my PhD and never fully left them,” he said.

Over the years, about a dozen students have assisted Dr. Ziesmann with his termite research. Larsen caught Dr. Ziesmann’s attention in the fall of 2017 after she turned in a paper about toxoplasmosis, a parasitic condition commonly associated with cats and litter boxes. Larsen said toxoplasmosis was her and her sister’s “favorite disease.”

“We both really like science, but she likes plants and I like people,” Larsen said. “She went into biology and I went into nursing. Growing up, we tried to out-science each other.”

Impressed with Larsen’s research skills, Dr. Ziesmann invited her to assist him in the lab. “She’s a highly interesting student,” he said. “She knows a lot.”

Larsen started working with Dr. Ziesmann on a volunteer basis, one or two afternoons a week, around her classes and weekends spent with the university’s EMS squad. She even presented their research at the Eastern Branch meeting of the Entomological Society of America in March.

This summer, however, Larsen’s research is being funded by an undergraduate science research fellowship awarded by Carilion Clinic and the Virginia Foundation for Independent Colleges. The $2,000 grant is given to students who are pursuing health care careers.

“It helps cover living [expenses] and everything,” Larsen, a nursing major from Raleigh, North Carolina, said. “It’s a really nice opportunity to get to do something that I’ve been doing for free. I will have the time to do longer tests and work on some of the projects I’d like to do.”

For the past several weeks, Larsen and Dr. Ziesmann have been doing tests aimed at determining what kinds of chemicals present in decomposing wood attract termites.

“Here’s an analogy,” Dr. Ziesmann said. “Sit down, see the steak, smell the steak. Already, you have water in your mouth. It’s exactly the same. What is in wood that tells the termites, ‘This is good food’? How do they know to eat this instead of other things? Which of these chemicals that go into the air — these volatiles — tell the termite, ‘Eat me’?”

Before their work together is done, Larsen and Dr. Ziesmann hope to test 20 different chemicals for positive, negative, or indifferent reactions from the termites. As of late July, they had already made some discoveries.

Among other things, Dr. Ziesmann said, termites are indifferent to hexanal, “what makes grass smell green,” and attracted to limonene, “what makes limes smell like limes.” He said termites also have a positive reaction to dodecanoic acid, a fatty acid used in soaps and cosmetics.

A termite is deposited into the Petri dish and for two minutes, 30 seconds, an overhead video camera records what happens. If the termite walks within 13 mm of the chemical line, Larsen said, it’s deemed a “positive” result and suggests the termite is attracted to that chemical.

While demonstrating the trail-following test for a visitor to the lab, Larsen remarks that the termite looks “excited.” This doesn’t escape her professor and results in some good-natured banter.

“We do not humanize the termites.” 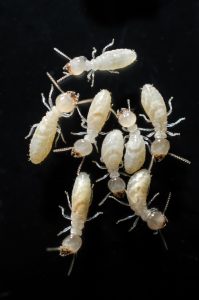 The choice test operates in a similar fashion, except that termites are placed in a Petri dish where half of the paper lining is coated with a chemical. Each termite is left alone for 24 hours to see whether or not they eat the chemical side of the paper.

Regardless of the reaction — positive, negative, or indifferent — the tests are repeated using lower and lower concentrations of chemical until, as Dr. Ziesmann put it, “there’s no response” from the termites.

As one might imagine, this is time consuming. A single round of trail-following for one chemical takes about 2 hours and involves 24 individual termites. Multiply that times 20 different chemicals and it’s little wonder that they’ve been pondering using physiological rather than behavioral reactions.

“We’re starting to devise a test to see if you can get them to respond to smells,” Larsen said, adding, “You can fake your behavior but not your physiology.”

According to Dr. Ziesmann, research has shown that odorants can cause a physiological reaction in humans. “It would be cool to see that in termites, too,” he said.

First of all, however, one must take the pulse of a termite, which is not as difficult as one might imagine. Dr. Ziesmann explained that termites have a “clear cuticle” — in other words, they’re see-through — so a termite’s heart can be seen contracting, albeit with help from a microscope.

Similar to how Larsen might check the pulse of a human patient, you simply count the contractions for 30 seconds and multiply times two.

Asked about the “average pulse of a termite,” Dr. Ziesmann said that’s difficult to say because they’ve only taken the heart rate of two termites so far. It’s also dependent on room temperature. The heart rates of the two termites they did check, however, ran about 80 to 85 beats per minute.

“I took a termite heart rate yesterday. It was pretty cute,” Larsen said recently, before catching herself. “Not sure I’m supposed to say ‘cute.’”