On Saturday, Jyoti Aggarwal will graduate from University of Lynchburg with a Master of Education in Science Education. With the degree, she’ll be one step closer to becoming a chemistry professor. Asked about her career goals, she said, “It’s a pretty straightforward answer,” adding that she’s planned since high school to earn a PhD and teach at the university level.

This summer, Aggarwal will take another step, when she heads to the University of South Carolina to pursue her PhD in chemistry. “When I have my own ideas and I do that, I get success,” she said. “It was my idea to come out from India and my idea to do the PhD.”

Two years ago, Aggarwal traveled from Delhi, India, to Lynchburg, Virginia — from a city of about 18.6 million people to a city of about 80,000. It was her first plane ride and her first trip to the United States. Leaving home and family was “emotional,” she said, and tears streamed down her face as she watched Delhi grow smaller and smaller through the window of the airplane.

Despite her sadness, Aggarwal was determined to achieve her educational goals, something that might have been more difficult in India. Some of her relatives didn’t want to educate their daughters, she said, and were “only interested in getting them married.” Aggarwal said her parents were different, and that her father once got angry with a family member who suggested she get married instead of going to college. 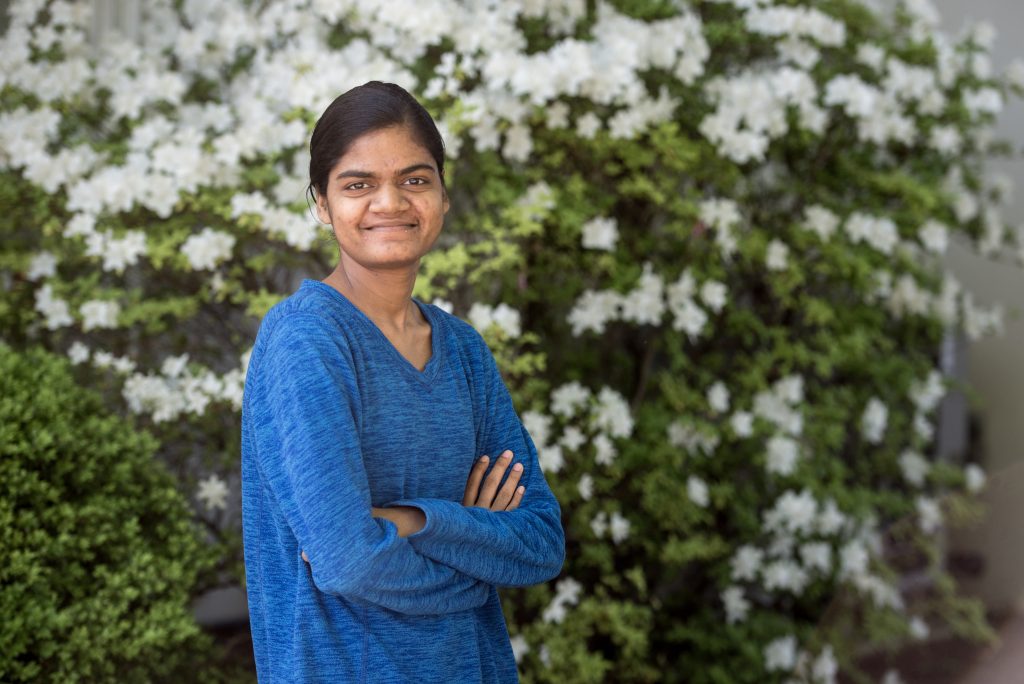 Aggarwal’s mother has a master’s degree in commerce. Her father graduated from high school and repairs electronics for a living. When she was trying to learn English, Aggarwal said it was her father, who speaks only Hindi, who encouraged her to speak the new language at home, even if no one understood what she was saying.

Aggarwal said she also was supported by the faculty at Miranda House, a women’s college in Delhi where she earned her undergraduate degree. Lynchburg has a partnership with Miranda House. In particular, she credited the college’s principal, Dr. Pratibha Jolly, and Dr. Bani Roy, who helped her to apply to University of Lynchburg.

Before she came to the U.S., Aggarwal’s father encouraged her to do a number of things. In addition to learning English, he told her to learn to drive and learn to swim. Aggarwal hasn’t learned to drive yet, unless a winter-break spin around a parking lot counts, but last summer she did take swimming lessons.

She took lessons at a public pool with Sara Bryant, mother of Lynchburg Chaplain Stephanie McLemore. Aggarwal calls Bryant her “American Mom” and said Bryant agreed to take lessons with her after she admitted that swimming scared her. Aggarwal overcame most of her fears of the water but said she plans to take lessons again this summer.

While not on her father’s to-do list, Aggarwal has a fourth goal: Bake a cake. While she’s a fan of “The Great British Baking Show” and one of its judges, Paul Hollywood, she’s never baked a cake. Hopefully, that box will be checked off soon at the home of a staff member, who has offered to teach her. According to Aggarwal, it’ll be a chocolate-glazed cake.

Before she heads to South Carolina, Aggarwal will do an internship with Dr. Tom Shahady in environmental science. Their research will involve water quality, a subject Aggarwal tackled for this year’s Student Scholar Showcase. Her entry, “Effectiveness of Low-technology Water Purification Techniques,” won first place in the Graduate category for poster presentations.

This summer, Aggarwal also will continue working as a student assistant in the Graduate Studies office for Dr. Atul Gupta, dean of Graduate studies, and Ty Eccles, director of Graduate Studies. She has worked there for the last two years and said she’s learned a lot about working in an office from Dr. Gupta, Eccles, and Janice Quattlebaum, the administrative assistant.

She said she’s also gotten a lot of encouragement from Dr. Sally Selden, vice president and dean for Academic Affairs at Lynchburg. “She motivated me every time I talked to her about getting into a PhD program,” Aggarwal said.