/ Faculty / Professor shares insights on gender and the Olympics

As the world has tuned into the Olympics, Dr. Lindsay Parks Pieper, a University of Lynchburg sport management professor, has been in the news giving context to various issues in women’s sports. 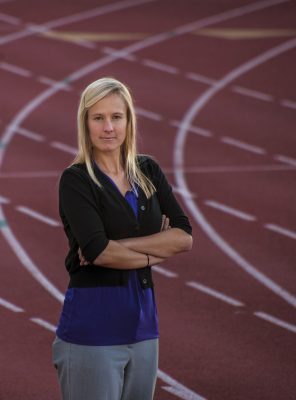 On Thursday, the Washington Post published an op-ed she wrote about how gender stereotypes set up double standards that hurt women athletes. A week ago, she was featured in a Yahoo Lifestyle story about why some Olympic sports are called “women’s” but others are called “ladies.”

Before that, her book, Sex Testing: Gender Policing in Women’s Sports, won two prestigious awards — a “Choice Academic Title” listing by the American Library Association and Outstanding Book Award from the North American Society for the Sociology of Sport.

She also will speak about the topic of sex testing harming female athletes on Wednesday, March 14, at 7 p.m. in Memorial Ballroom. Her lecture is part of the Westover Honors Program 30th anniversary celebration.

Dr. Pieper grew up playing soccer, and she played lacrosse when she was majoring in communication at Virginia Tech. She thought she would become a sports journalist, but once she discovered sport management as an academic discipline, she was hooked.

Her PhD dissertation, which became her book, takes one of the first looks at the broad history of Olympic sex testing policies, which began in 1968.

“Any time a female athlete won and she didn’t ‘look like a woman’ — she was muscular, powerful, or strong — people would point fingers and say she must not be a woman — a freak, a man in disguise with an unfair advantage,” Dr. Pieper explained. Those accusations were first leveled at Soviet women, but eventually women of color were targeted.

The policy has wavered and is currently suspended at the Olympic level, but controversy continues. The South African runner and 2016 gold medalist Caster Semenya was the center of controversy and was subjected to sex tests in 2009. “A lot of people said some pretty nasty things about her, and I would argue it’s because she doesn’t fit the stereotype of white womanhood,” Dr. Pieper said.

Society’s expectations for women athletes strengthens a double standard and “criminalizes women athletes,” who are expected to train and exercise in order to excel while also a maintaining an image that is impossible for some. “Society wants female athletes to participate and do well, but society also wants them to look a certain way,” she said.

In the University of Lynchburg classroom, Dr. Pieper shares her expertise to help her students understand ethical considerations in the decisions they will face in sport-related careers.

“I try to bring sport history into all of my classes, even outside the gender dynamics I’m focused on,” she said. “Context is really key with everything we discuss. We ask a lot of questions about right and wrong. In the world of sport management, sometimes people are out to make money, but they need to keep in mind that there are ethical questions here as well.”