/ News / Volunteering ‘the key to everything,’ says alumna

A few years ago, Liz Childress Burneson ’12 was fresh out of University of Lynchburg and living in Richmond. She had a new job in a new, big city. It was totally different from college life, where Burneson said she was “supported and involved in so many things,” including Westover Honors and volunteering with the local Big Brothers Big Sisters group.

To fill the void she was feeling, Burneson got involved in her new community. “I really started volunteering in earnest right after I left LC,” she said, adding that volunteering “really was the key to everything that’s happened to me since I left college.” 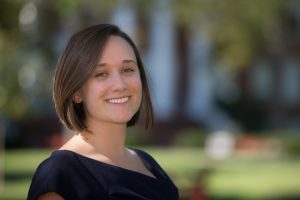 Since then, Burneson, a double major in French and philosophy at Lynchburg, started law school at the University of Richmond. She’ll graduate next spring and has already accepted a job at what she describes as “a medium-sized law firm doing business litigation.”

She said the firm encourages pro-bono work, which is in keeping with her continued desire to serve. “I’ve always been interested in volunteerism and what motivates some people to go above and beyond and think about ways we can help others,” she said.

At Richmond Law, Burneson founded Public Policy and the Common Good and serves as its president. “I founded the organization after seeing an opportunity to increase civic engagement and civil discourse at the law school,” she said. “We host discussion circles, voter registration and get-out-the-vote efforts, as well as career panels for students who are interested in policy or political work.”

Among other things, the Equality Bar Association helps transgender people complete the paperwork required for name changes on birth certificates, driver’s licenses and other documents. “We’ve done three clinics, where I work under an attorney and we get to talk people through the process,” Burneson said. “We get all the paperwork ready and get the instructions, and they have to file everything in court. It’s a road map of how to get that taken care of.”

Burneson also was recently appointed to a second term on Gov. Terry McAuliffe’s Advisory Board on Service and Volunteerism. Having worked on McAuliffe’s election campaign, she said she wanted to “stay involved.”

“I was doing volunteer work in Richmond already,” she said. “It seemed like a good fit. I was lucky enough to be appointed.”

The way it works, she explained, is you apply for two or three boards and, if appointed, “they’ll pick the one that’s the best fit and where you’ll be the most helpful.”

The Board works out of the Virginia Office on Volunteerism and Community Service and has two main functions: managing the Commonwealth’s AmeriCorps programs and a second, “kind of volunteer and civic-engagement” role, she said.

The latter includes planning an annual conference for nonprofits and faith-based groups and choosing winners of the state’s Annual Volunteerism Awards. “That’s really fun because you get to read through nominations [about] people and families and companies giving back in really huge ways,” she said. “It’s really uplifting to read the nominations and really hard to pick winners.”

She added that serving on the board “has let me really see good everywhere and all the really charitable things people are doing all over the Commonwealth.”

Burneson said her Lynchburg experience helped prepare her for law school and for a life spent serving others. She credited two former professors, the late-Dr. Lesley Friedman and Dr. Laura Kicklighter, with inspiring her. “I think there’s a connection between service and my classes in philosophy and ethics with Dr. Friedman and Dr. Kicklighter that made me consider what’s the most good I can do and how to do that,” she said.

Asked why volunteering is important, Burneson said, “It’s important for you, for your soul. It’s hard to be upset about something when you’re busy being useful. I think it’s good for you, of course, but it also makes your community a better place. Volunteering is the way we get to vote, every day, with our time and our money for the type of world we want to live in.”

Burneson sat down with College Communications and Marketing during Homecoming to talk about her life after Lynchburg: