What would happen if you gave students money from the College’s endowment and then let them invest it on the stock market? For several months, business and economics students have been doing just that at University of Lynchburg’s Financial Technology Center.

“We’re trying to give them real-world skills,” said Dr. Michael Schnur, economics instructor and job placement coordinator. “We have $100,000 from the endowment, and last March they started investing in exchange-traded funds.

“Large and medium-cap stocks in the large indexes, as well as a corporate bond fund — relatively safe, unless the whole market crashes. We’re trying to keep it relatively conservative and not trying to get into risky investments.”

He added that all of the transactions go through him so there are no “rogue traders.” 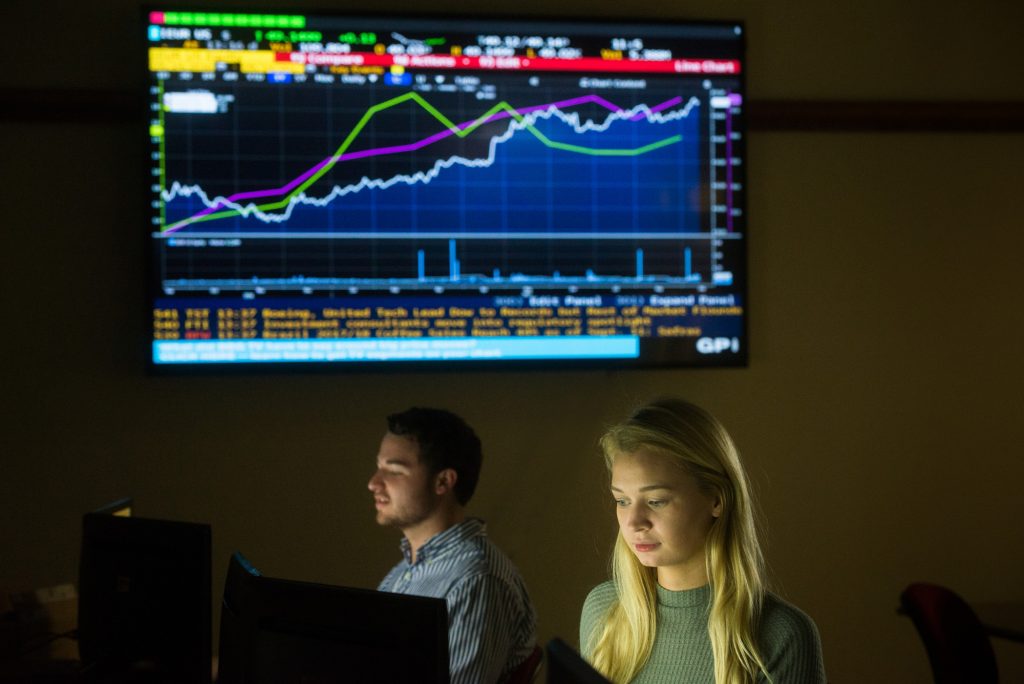 This fall, the student investors have new tools at their disposal, including a Bloomberg Terminal. As described on Bloomberg’s website, the terminal “is the most powerful and flexible platform for financial professionals who need real-time data, news and analytics to make smarter, faster, more informed decisions.”

Bloomberg provides the terminal, Dr. Schnur explained, and Lynchburg pays a subscription for the data. In addition to providing students with the data they use in making trading decisions, the technology gives students the chance to become “Bloomberg certified” through Bloomberg Market Concepts at no additional cost. Dr. Schnur described the eight-hour certification as a “big Wall Street thing” and said it’s “great for the resume.”

The Financial Technology Center, sometimes called the “trading room,” now has three Rise feeds — large monitors that display financial news and live data on commodities, interest rates, and stocks from U.S. and foreign markets. There also are subscriptions to eSignal and Morningstar, which are popular tools for investors.

“eSignal can be used to run algorithms and for backtesting,” Dr. Schnur said, the latter referring to a process that uses historical data to gauge risk and profitability before any actual money is spent. “Morningstar gives data like return and risk and breaks down data of the ETF or mutual fund.” 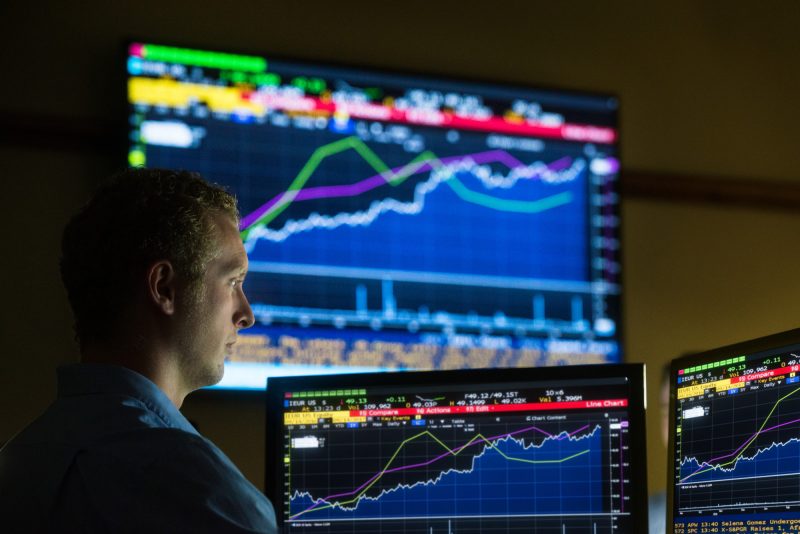 As a side note, Dr. Schnur is personally funding the eSignal and Morningstar subscriptions.

Cole Barrett ’17 and Zack Engelmann ’17 were instrumental in getting what’s called the Student-managed Investment Fund off the ground. In fact, Dr. Schnur called the pair his “go-to guys.” During their senior year, Cole and Zack led a team of students that, among other things, secured the needed funding from the College’s endowment.

“I learned that it’s not easy to pursue something unknown,” Cole said. “We were attempting to do something students at LC had never done before. … Our objective was to create an everlasting organization that would not only provide students with opportunity, but would grow the School of Business and Economics and all other schools at the College.

Investing in their first stocks was just the beginning. Cole and Zack hope the opportunity attracts future students, and they want to stay on board and provide guidance as alumni. “This was not something we wanted to do for one year before we left,” Cole said. “We want it to flourish eternally alongside Lynchburg.”

After graduating with a degree in economics and finance this spring, Cole went to work for the global investment management firm Aegon USA. Zack, who majored in financial economics with a minor in fraud investigation, works for S&P Global in Charlottesville.

The trading room experience added to what Cole was learning in the classroom and prepared him for his career. “I learned things about the market, macro trends, the actual process of going through a broker to execute investments, things like that,” he said. “Those types of things are extremely important to someone who is aiming to go into finance.”

In addition to technical skills with trading technology, Cole also gained the experience of working with a team to start the program. “I gained applicable knowledge to my field, but I also gained an interesting story to tell recruiters,” he said. “I got to describe something that I was passionate about. That was certainly the most valuable.”

Cole, who uses the Bloomberg Terminal in his current job, said the terminal and Bloomberg certification will improve opportunities for Lynchburg students and graduates. “I could go on for hours about this,” he said. “Some may say that being able to say you’ve used a Bloomberg Terminal is a great resume builder, which it definitely is, but in reality it’s much more than that.

“A student gets to see what an actual trader, analyst, or head of investment deals with on a daily basis — meaning, that you get to sit in that seat and spend time figuring out if this is something you can be passionate about.

“It allows you to get invaluable information about global markets that serve as a foundation for any interview process or future job a student might come across. It will also be a huge help for future portfolio construction and analyzing securities.”

Zack agreed. “The new trading room is only going to help students,” he said. “Finance firms are always looking for experience and hopefully this will start attracting these firms to come on campus and interview more Lynchburg students for premier positions.”