Two University of Lynchburg art alumni recently worked with each other, and artists of all experience levels in Lynchburg, to create a community art project at Get Downtown, a Lynchburg street festival. 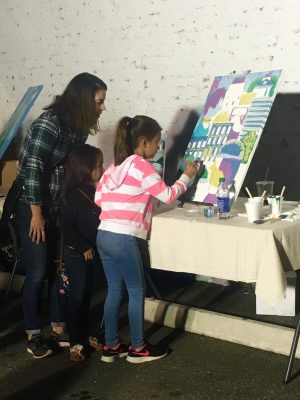 The project started out with an idea to create a mural and auction it off for charity. “We wanted to represent Lynchburg as a whole,” said Christina. The artists sketched images on three canvases, picked the color palates, and let members of the public complete the painting during Get Downtown on Friday, September 8.

Christina enjoyed watching people pick up paintbrushes and get creative. “Art is like therapy in the way that it brings out a different side of you,” she said.

“It was really fun,” said Stephen. “Initially people didn’t want to mess up so they were hesitant, but we just told them to go at it.”

Stephen is a member of the James River Council for the Arts and Humanities board, and he believes it is important to get people involved in creating art as well as experiencing it. “It helps connect the community, helps you express yourself, and it’s nice to see the Lynchburg community do more of that,” Stephen said.

Christina agreed that art brings people together. “Art is as diverse as handwriting, so it’s fun to get different views and get to know people,” she said. Public art is like “leaving our fingerprints behind for others to learn about us in the future.”